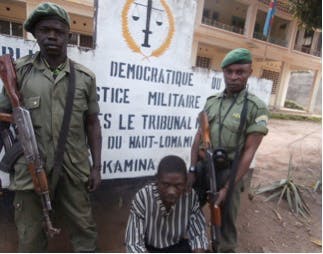 KATANGA 23 January 2018: Rombeau Lunda Ngandu, a member of the Royal Family of the Kinkonja Chiefdom and notorious elephant poacher responsible for killing countless elephants in the Democratic Republic of Congo’s Katanga province, has been arrested and sent to a military court for trial.

Rombeau, who is believed to have commanded poaching gangs and personally killed more than 20 elephants in the besieged region in the past few years, was arrested after months of surveillance and investigations by rangers from the Upemba and Kundelungu National Parks.

Elephant populations in Katanga and the wider DRC have been in serious decline from poaching for more than a decade. The struggling elephant populations that remain in the DRC, a vast area suffering the continued presence of rebel militia and highly organized poaching gangs, are now the most threatened in Africa. Although once numbering many thousands, it is thought that as few as 180 elephants remain in Katanga today.

Rombeau’s arrest, announced today by the parks’ management, Forgotten Parks Foundation, and the Elephant Crisis Fund - an organization that supports the Foundation by funding anti-poaching efforts in the region, brings fresh hope that park authorities are starting to gain the upper hand over ivory poachers and traffickers.

Pastor Cosma Wilungula, the Director General of the Congolese Institute for Nature Conservation (ICCN) praised the efforts of the rangers saying: "It is difficult to overstate the significance of this arrest. Rombeau has been at the forefront of elephant poaching in Katanga for many years, and his arrest sends out a strong message to all those involved in poaching and ivory trafficking."

Rombeau stands accused of having killed six elephants last year, including two pregnant females, after opening fire on a herd of 90 elephants a Mulenda in the Territory of Manono. One of the heavily pregnant females was initially fatally shot, and another died of her injuries on the banks of the Congo river near the village of Kakombo four months later. Last month Rombeau is thought to have killed five hippos. Both species are protected by law. More than 20 elephants are believed to have been killed by Rombeau over the last few years, and many more elephants are thought to have died at the hands of a team of poachers operating under his command. One poacher who was arrested earlier during the course of the investigations claimed to have killed more than 30 elephants under the orders of Rombeau.

Rombeau will be tried in Kamina and the ICCN will bring an experienced lawyer from Kinshasa to ensure the correct application of the law and that justice is served. If found guilty of the charges brought against him, Rombeau will be transferred to the Central Prison of Makala in Kinshasa to serve as an example to others.

The Elephant Crisis Fundhttp://www.elephantcrisisfund.org/
, operated by Save The Elephantshttp://www.savetheelephants.org/
and the Wildlife Conservation Networkhttps://wildnet.org/
, together with the Fondation Segréhttp://www.fondationsegre.org/
, has helped significantly weaken the poaching network in Katanga. The ECF operates a unique 100% donation model with all funds going directly to support elephant conservation projects in the most critical hotspots of Africa. Fondation Segré is a Swiss-based foundation committed to protect the biodiversity of our planet through the active conservation of threatened species and the restoration of degraded ecosystems. In the Upemba and Kundelungu National Parks, the ECF and Fondation Segré have funded ranger and patrol costs as well as the implementation of anti-poaching and tracking technologies.

Chris Thouless, Director of the Elephant Crisis Fund, said: “The arrest of the notorious elephant poacher Rombeau is testament to the work of the foundation, the ICCN alongside rangers and anti-poaching patrols working in the DRC, to intensify pressure on poachers and traffickers and make it harder for them to operate in the region.”

Robert Muir, Director of Upemba and Kundelungu National Parks said: “Under no circumstances can the rangers of Upemba and Kundelungu National Parks afford to take the pressure off the poachers. The remaining elephants in Katanga require round-the-clock protection and monitoring, and the rangers are working hard to build the park's intelligence and investigations capability. Rombeau’s arrest, however, does bring light at the end of the tunnel and we are grateful to the support of The Elephant Crisis Fund and Segré Foundation who are helping us better equip our rangers and ensure criminals are arrested and properly trialled in court.”

For more information and images please contact:  Jane Wynyard Head of Communications Save The Elephants +254 708 669 635

About Forgotten Parks Foundation Forgotten Parks Foundation’s vision is a world where national parks, biodiversity, and healthy ecosystems are valued and protected as an integral part of the lives and well-being of a global society. Over the next decade, the Foundation’s mission is to identify the world’s 25 most important Forgotten National Parks and Protected Areas, and in partnership with governments and local communities ensure their long-term protection. The Foundation’s initial focus is on Upemba and Kundelungu National Parks in the Democratic Republic of Congo where a 15 year Private Public Partnership Agreement has recently been signed with the Congolese Government. The long-term protection of these two parks is being achieved through the provision of management support, community development and the implementation of sustainable financing mechanisms.

About The Elephant Crisis Fund The Elephant Crisis Fund (ECF) is a joint initiative between Save The Elephants and the Wildlife Conservation Network, in partnership with the Leonard DiCaprio Foundation. The ECF supports 169 projects by 57 partners in 31 countries across Africa and the world. From funding investigations into the illegal ivory trade markets of East Asia to assisting with aerial operations and intelligence networks in the frontline battles for elephants, the ECF has deployed more than $12 million in just four years. The ECF is unique in that 100% of donations go directly to the partners in the field, on the frontline in the battle against elephant poaching.

About Upemba and Kundelungu National Parks  Upemba National Park was established in 1939.  At the time of its creation, it was the largest national park in Africa. Kundelungu was established in 1970. These high altitude savannah plateaus are amongst the last remaining truly wild landscapes in Africa and protect an important wetland area that lies at the source of the mighty Congo river. German Cooperation has recently begun supporting the conservation and development of Upemba and Kundelungu National Parks, and it is hoped that the EU will soon provide additional support to help protect the park's elephant population.  For the time being, the two parks are fully reliant on donor funds to meet their operational costs.